Can COVID-19 help accelerate Northern Ireland into an Enabling State? 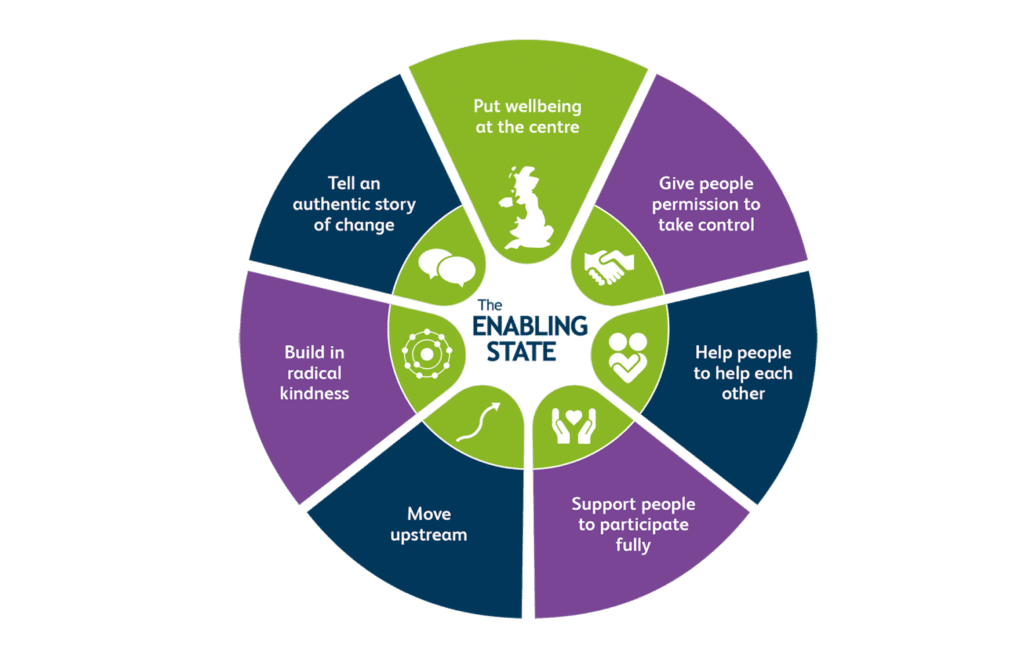 We have faced no greater challenge in recent history than the COVID-19 crisis. The pandemic has touched every part of our lives – our health; our wealth; our relationship with our governments; and our relationship with the environment. It has magnified pre-existing practice – where systems and relationships were working well, they have gone from strength to strength; where there were failings and tensions, these have been exacerbated. But with challenge comes opportunity – to re-imagine; re-define and re-set.

At the core of the response to the crisis has been a recasting of responsibilities – citizen, sector, tier, and title have, in some cases, ceased to become relevant. Instead, in a short space of time the wellbeing of citizens has been placed at the centre of services in a way that frameworks, policy and practice have proposed for decades. And so as the immediate crisis abates, the question of who is best placed to deliver what, and why, in the recovery, based on our aspirations, experiences during the pandemic, and our new expectations, can now be considered. Which is why, as a common thread to recognise #samestormdifferentboat and to #BuildBackBetter, the Carnegie UK Trust advocates for the transformation to an #EnablingState across the UK.

An Enabling State is one that supports people and communities to achieve positive change for themselves, and in doing so, ensures that no one is left behind. For over eight years, the Trust has been working on research and development in this area, examining the key characteristics that support communities to bring about change. Our recently revised route map and guiding principles for recovery explores some of the changes we have observed during the pandemic, and outlines seven steps to help shape the future.

And although just over a year ago we found Northern Ireland’s progress in this transformation to be inconsistent, evidence collected by NILGA for the Trust indicates that the crisis has the potential to accelerate the Executive playing a more facilitative, empowering role for its citizens. Northern Ireland is particularly well-placed to further develop into an Enabling State as the first step, putting wellbeing at the centre, is a long-standing commitment across the tiers of government. From the Executive’s draft Programme for Government to Northern Ireland’s 11 Community Plans, a commitment to improve citizens’ wellbeing, from the economy to the environment, is defined as the goal of government – into as far into the future as 2035 at the local level.

Such a commitment mandates ways of working which have been demonstrated during the crisis, and can be scaled up to common policy. We’ve seen green shoots of people being given permission to take control, with local authorities such as Ards and North Down Borough Council responding to the crisis by convening and signposting to the support provided by community groups.

We’ve seen the power of helping people to help each other, such as in Fermanagh and Omagh, where community funding is available in each District Electoral Area for groups to provide support to vulnerable residents. And, in the community and voluntary sector, the rapid redeployment of services which empower staff and volunteers to provide new and bespoke support, such as befriending, during this anxious and isolating time.

We’ve seen volunteering develop fascinating new demographics, as a direct result of furlough for some, while cutting out the commute for others, meaning much more meaningful time spent in our communities. But supporting people to participate fully – to help or be helped – has required concerted effort. For example, Armagh, Banbridge and Craigavon Borough Council, in partnership with the Police Service Northern Ireland, has sought to engage with members of the community who may experience language barriers, while in Mid Ulster, grants are available for those supporting the geographically isolated.

The pandemic has shown a need to move upstream, towards more preventative approaches, particularly for children and young people who may suffer the impact of the virus for the longest, and who are worried for their future. Inequalities have been exacerbated by the COVID-19 crisis, yet positive new examples of light-touch prevention strategies have also emerged. In Antrim and Newtownabbey, ‘perk me up’ and positivity packs were distributed to young people to recognise and support the importance of mental health. In Derry and Strabane, online challenges, interactive games and creative writing projects were developed to increase connectivity and tackle social isolation. In Belfast, youth groups focusing on resilience moved online.

And there are countless examples of kindness that emerged in response to the crisis across all of the local authority areas. From the 4,000 scrubs made by the 60 strong ‘Band of Stitchers’ in Mid and East Antrim to the food and toiletry packs delivered by volunteers in Newry, Mourne and Down, these examples show us just what is possible. They provide the building blocks for empowering and enabling people to come together – when the time is right – to forge new positive relationships and community values. Learning from and embedding these relational approaches will be critical to the design and re-design of public services as they support communities to recover. Those working on the immediate crisis response worked hard to ensure that everyone’s needs were met; now it is time to refine these approaches so that they become part of the infrastructure of the community in the future.

There are many complex stories and differing experiences of the pandemic. Each deeply personal and unique to individual circumstances. And although we all experienced the pandemic, we know that some were in a better position than others to weather the storm. Sharing these stories to understand more about the communities in which we live, and hope to live, in the future will be a significant part of recovery. During the crisis, those living in Causeway Coast and Glens and Lisburn and Castlereagh started this process through the Dear Diary and Living History projects to capture multiple experiences and showcase the creativity of the community and its diversity as an asset. They demonstrate how building an authentic story of change can be used as a mechanism for learning, coming together, rebuilding, and collectively shaping the future in a way that leaves no one behind.

These examples are just the tip of the iceberg of the response developed by Northern Ireland’s local government and its partners. Examples which demonstrate that services have been responsive; informed by local knowledge and support; and rooted in a more equal relationship between citizens and the state. Examples that if supported, learned from, and scaled up, can shift Northern Ireland to a more agile model of public services which is relational; supports people and communities to achieve positive change for themselves; and leaves no-one behind. Examples which demonstrate that old permissions and conditions are up in the air – so let us seize the opportunity before they settle back into old patterns. Let us level up, Build Back Better, and complete the transformation to an Enabling State.